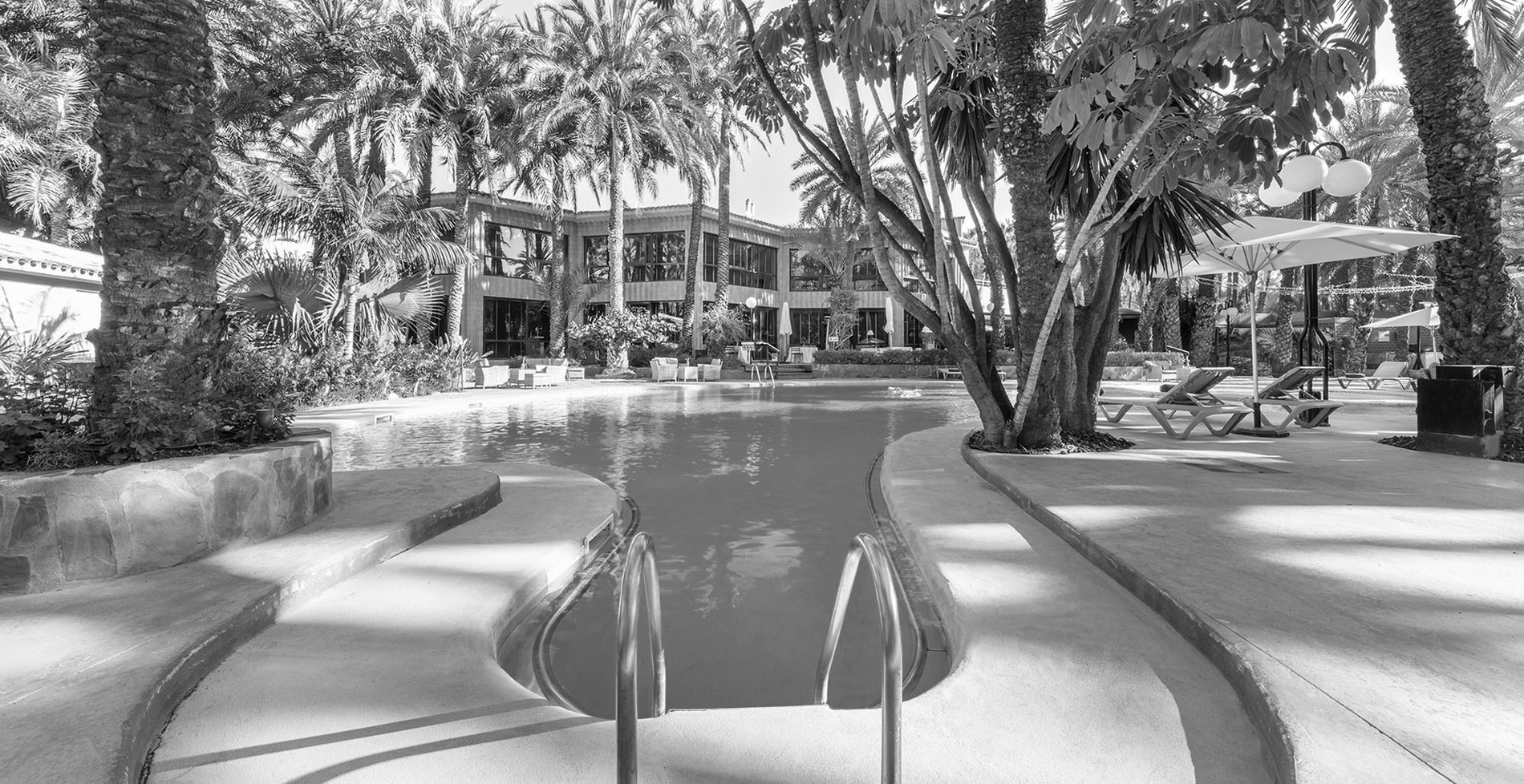 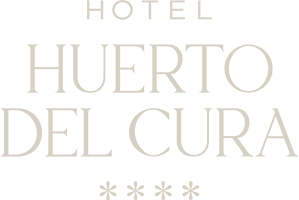 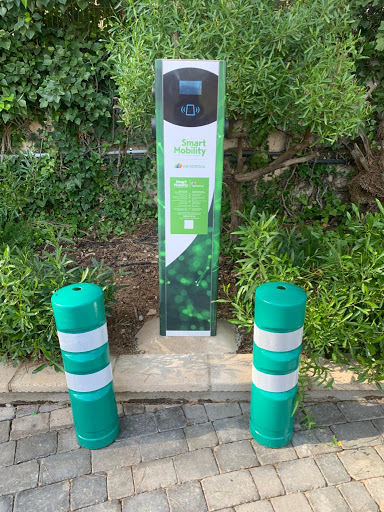 During the month of December, two charging points for electric vehicles were installed at the Huerto del Cura hotel. Its use is intended both for hotel guests, and for any citizen who requires it.

Against climate change, positive actions. At Port Hotels we know that taking care of the planet is everyone's responsibility.

We keep you informed of all the activities to do in Alicante, latest news and exclusive offers at the Hotel Huerto del Cura. 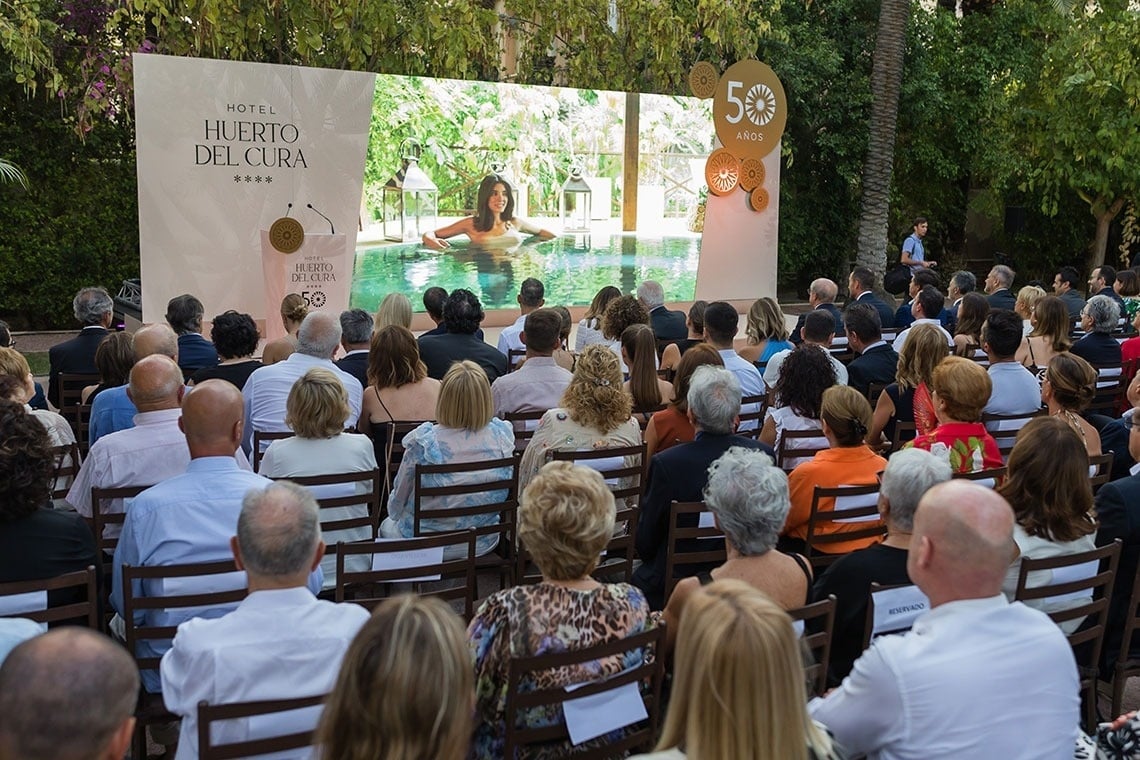 A very special celebration surrounded by great friends and colleagues. Discover how the 50th anniversary event of Hotel Huerto del Cura was in images
Read more 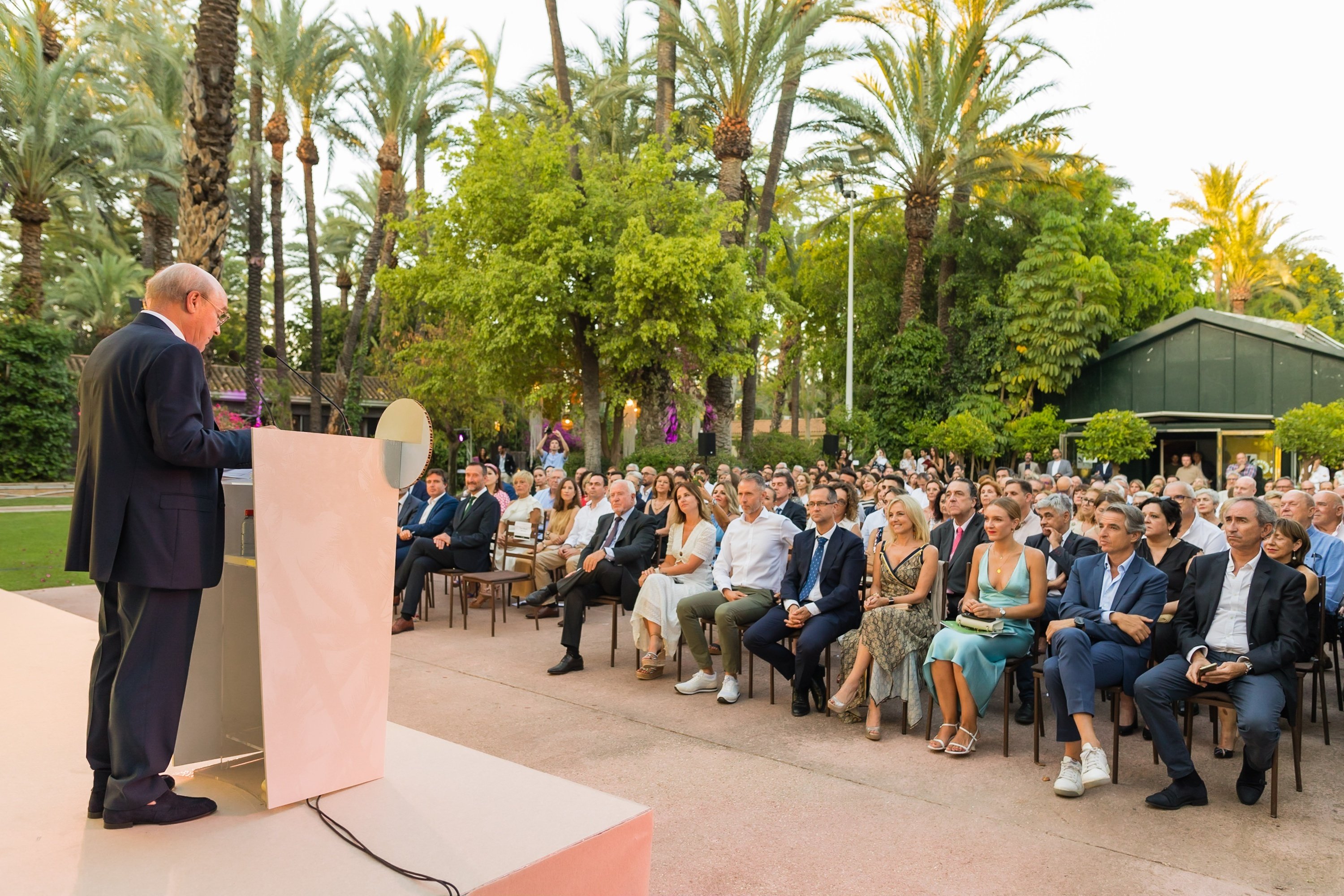 The Hotel Huerto del Cura, owned by the Valencian hotel chain Port Hotels, celebrated on Thursday its 50th anniversary in an institutional act with more than 300 attendees gathered in the greenhouse located in the garden of the same hotel in Elche. The ceremony was attended by the management of the hotel group, as well as the general director of Tourism of the Generalitat Valenciana, Herick Campos, the mayor of Elche, Carlos González, and various representatives of entities from Elche and the Valencian Community, such as CEV, Cedelco, IFA and Rotary Club Elche.
Toni Mayor, president and co-owner, and Rafael Blanquer, general manager of Port Hotels, opened the meeting by dedicating a few words of recognition to the former property, the Orts family. Likewise, both directors have shared the roadmap of the next projects that the company has devised and launched for the growth of the establishment and the experience of its clients.
“Since Port Hotels acquired the Hotel Huerto del Cura in 2019, our mission has been to consolidate and extend the vision of the founding family so that the hotel continues to be an icon of reference for accommodation in its category, a meeting point for the society of Elche and a place to come to celebrate the happy moments of our lives”, explained Toni Mayor at the end of his speech.
During the event, a video was also broadcasted with different testimonies in which important personalities highlighted its role as a catalyst for the socioeconomic development of the city of Elche and the well-being of its citizens. In the feature 'Hotel Huerto del Cura: the voice of the protagonists', influential people from the city and the province take part, such as the historian Miguel Ors, the journalist Gaspar Macía, Joaquín Buitrago, President of Elche CF, Doctor Fernando Soler, ophthalmologist and Director of FACO, Esther Guilabert, General Secretary of CEV, Carles Molina, Councilor for Tourism of Elche City Council and Mayte Antón, President of AEFA.
For his part, Rafael Blanquer has emphasized "the great challenge" that successfully managing the establishment has involved: "In this hotel we accommodate thousands of people throughout the year, we serve lunches and gala dinners, we offer leisure activities for both tourists and people of Elche. We are the meeting point for many families for large celebrations and meetings, and we are also a strategic ally for companies that trust us for their extraordinary activities. In this maelstrom of services, we have been able to find a balance thanks to having a clear direction and a great team.”
During the event, mention was also made of the chain's new projects for this emblematic hotel in Elche, such as the opening of the Leopoldo, a new gastronomic space in honor of the man who was head of the house for decades until last year he agreed to his retirement. The Leopoldo will offer a gourmet Mediterranean menu paired with Laurent Perrier sparkling wines as part of a recent collaboration agreement.
Read more 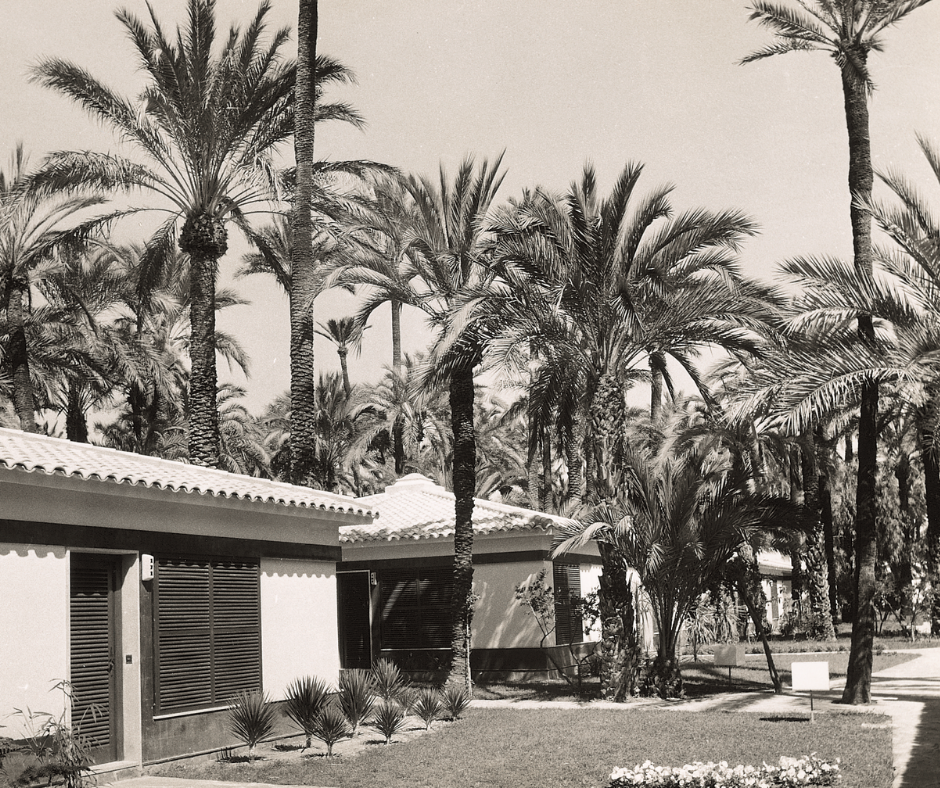 The Hotel Huerto del Cura, owned by the Port Hotels hotel chain, celebrates this year 50 years of history that will be celebrated throughout the year with culture, music and gastronomy.
The emblematic hotel in the city of Elche celebrates its 50th anniversary with different events that will be announced throughout the year, among which a Gastronomic Days highlighting a tour of its most representative dishes, a photography exhibition of the entire history of the establishment and a 50 Years Act in which tribute will be paid to the Orts family, founders of the hotel and to whom the current property has special consideration on this important date.
The 50 years of the Hotel Huerto del Cura will culminate with a Charity Gala in December whose profits will be donated to an association from Elche that has yet to be confirmed.
The General Director of the Port Hotels, Rafael Blanquer, assures: “This year is an extraordinary moment to consolidate our relationship with our regular clients and also to reconnect ties with all the people of Elche and the province of Alicante. We want to take advantage of the 50 springs of the Hotel Huerto del Cura to open the doors with new proposals and initiatives of great added value. The Hotel Huerto del Cura is a Heritage Site and we want its neighbors to always keep it in mind.”
The establishment wants to take advantage of this symbolic milestone to re-found its values ​​of conservation of the Palmeral de Elche and all the species that comprise it.
Read more 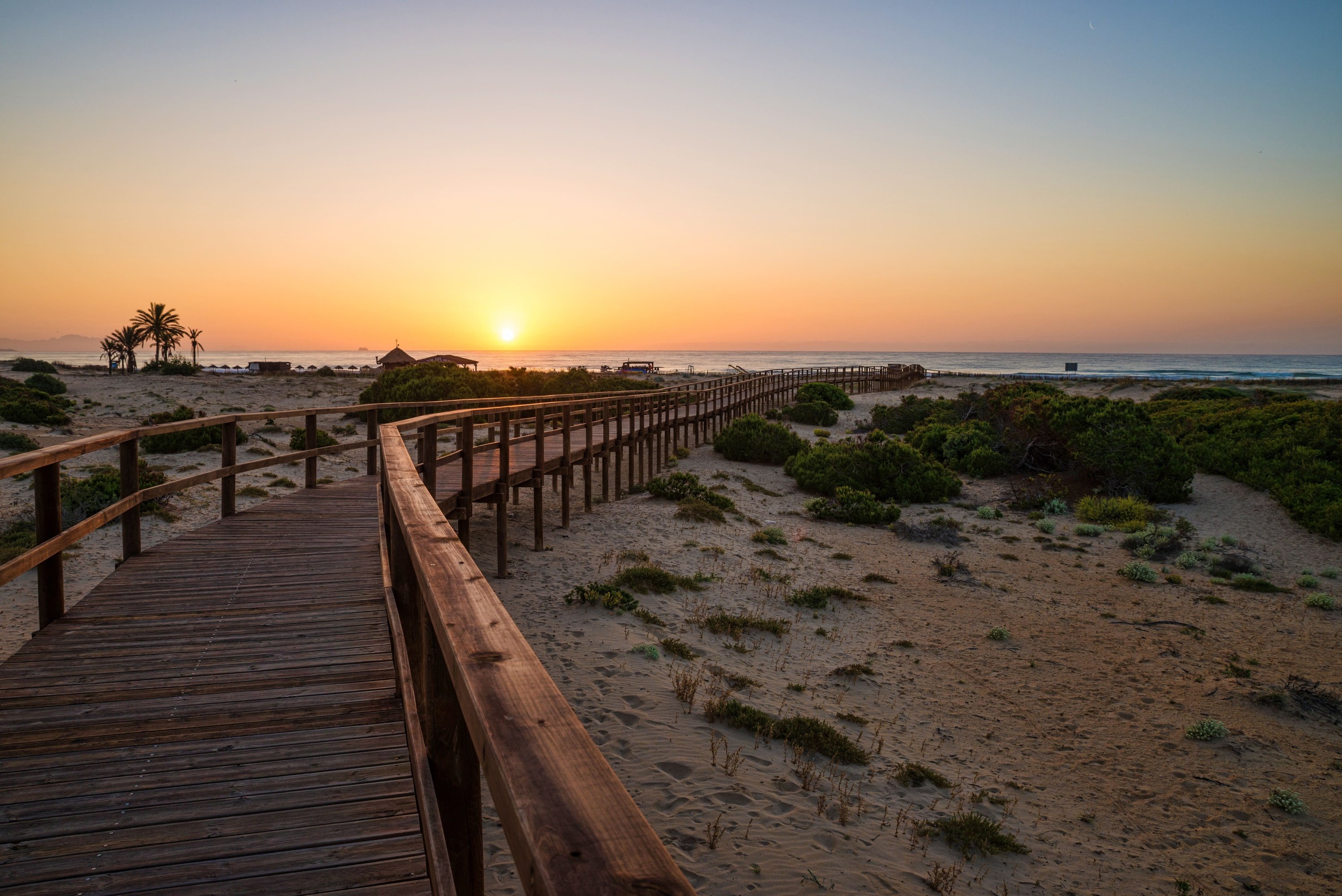 Choose your beach in Elche according to your personality

The coast of Elche has six extensive beaches where the north is characterized by its dunes and the south by its pine forests. With 9 km of spaces of great ecological value such as the Carabassi dunes or the beaches of La Marina, the beaches of Elche are perfect enclaves for scuba diving and water sports due to their proximity to the Tabarca Island marine reserve.


The wide beach of El Altet, in its two kilometers of fine sand , forms a dune ecosystem that makes it a national benchmark, given the scarcity of this type of habitat in the national geography. It has been awarded a blue flag due to its quality and accessibility.

With almost three kilometres, Arenales del Sol beach is one of the most valued on the Alicante coast , both for the quality of its waters, the richness of its seabed and for its embryonic, mobile, fixed and even fossil dunes. It is the only area with an urban center facing the sea and it has a long promenade, equipped with wooden walkways to access the shore.

Beach of fine golden sand , formed by a system that combines recent high dunes, fossil dunes and pine forests of great geological and environmental value. The richness of its seabed and its proximity to the Balsares and Clot de Galvany salt marshes and wetlands, with which it forms a single ecosystem, favor its consideration as an ecological protection area, with interesting native flora and fauna. It has a part classified as a free beach, suitable for the practice of nudism.

It extends along almost two kilometers of fine golden sand on an impressive dune strip, framed by an extensive pine forest that extends towards Guardamar del Segura, to the south, and the Natural Park of Las Salinas de Santa Pola, to the north.

A kilometer and a half of dune strip and an extensive pine forest are the main attractions of this beach, connected to the urban center of the district that gives it its name.

On the border with Guardamar and next to the mouth of the Segura river, it is a virgin and quiet beach with two kilometers of fine sand .
Read more 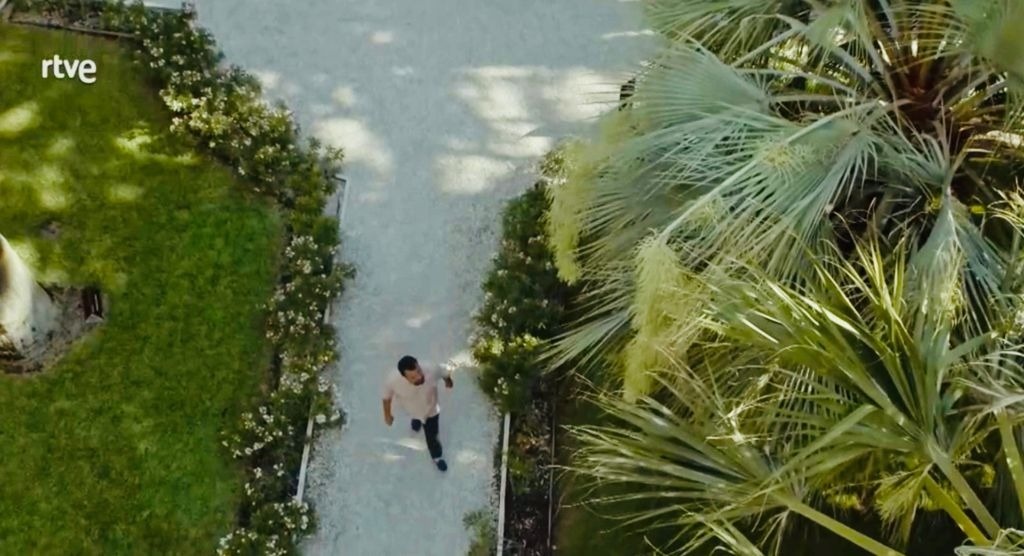 The program presented by the architect Arturo Franco broadcasts the episode dedicated to the Jardín Huerto del Cura , with which our Hotel Huerto del Cura shares natural heritage.
This documentary series reveals the vegetable and cultural heritage of the Huerto del Cura Garden and highlights the role of the Garden as part of the Historic Palm Grove of Elche, declared a World Heritage Site by UNESCO in 2000. The largest palm grove in Europe, made up of more than 200,000 specimens and about 50,000 in municipal gardens. 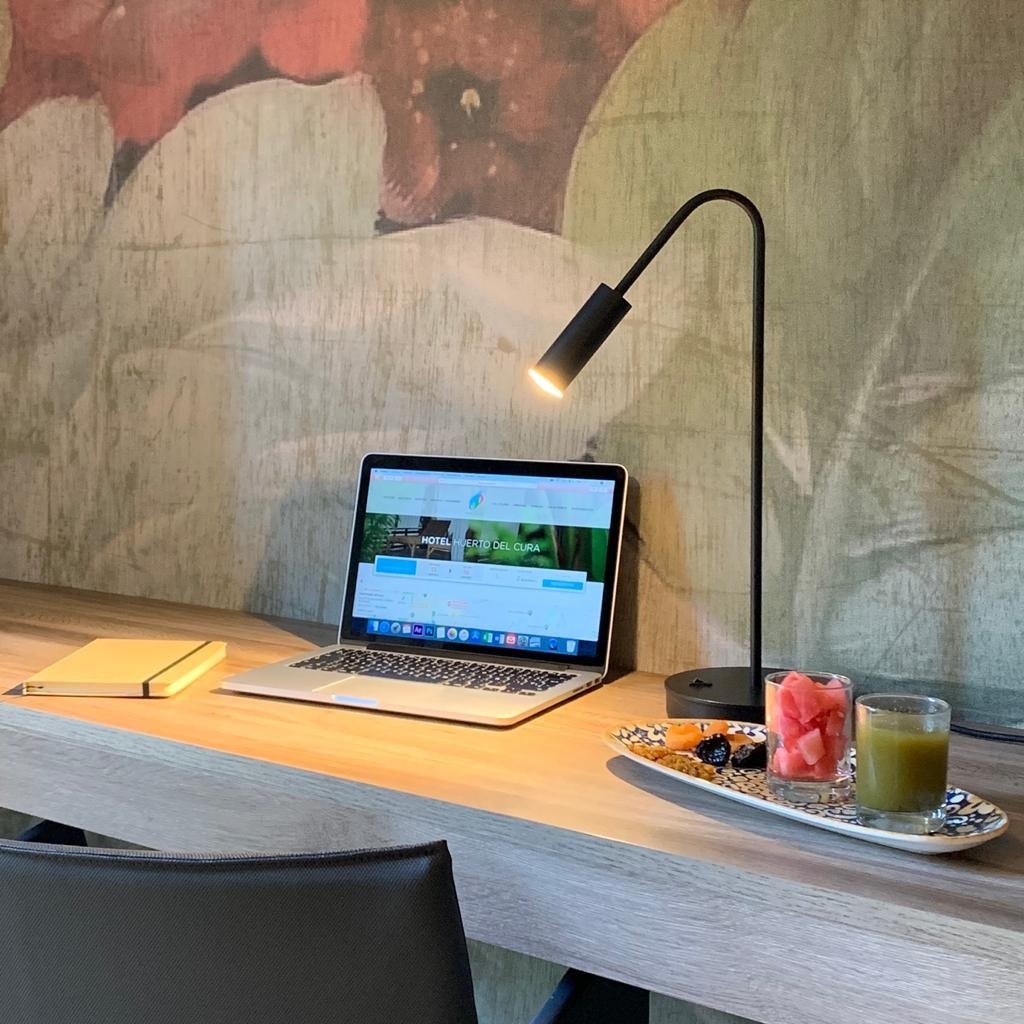 The Hotel Huerto del Cura turns its rooms into offices

Teleworking has become a reality for many people during the pandemic and at Hotel Huerto del Cura we want to make their lives a little easier to those who work and rest in the same space.
From now on, at Hotel Huerto del Cura we offer everything necessary for people who are working remotely, and we put every imaginable facility for them to be living and working in a unique space:
- High speed Wi-Fi connection.
- In-room coffee service.
- 60 minutes of free access to our Oasis Zen and our recently renovated gym.
- Special discounts in out massage selection.
- Free access to the printer.
Click here to find out the different offers available for teleworking from Hotel Huerto del Cura.
Come and stay with us!
Read more

During the month of December, two charging points for electric vehicles were installed at the Huerto del Cura hotel. Its use is intended both for hotel guests, and for any citizen who requires it.

Against climate change, positive actions. At Port Hotels we know that taking care of the planet is everyone's responsibility. 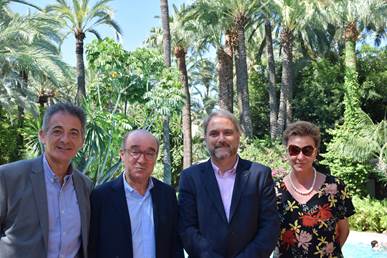 The rector of the University Miguel Hernández (UMH) of Elche, Juanjo Ruiz, and the President of Port Hotels, Antonio Mayor, have signed an agreement of commercial advantages for the university community of the UMH. This action is part of the collaboration framework agreement, which both institutions have signed this morning in the facilities of the Huerto del Cura Hotel in Elche.

Through this agreement, both entities will collaborate in the execution of joint educational and cultural projects and programs or in the cooperation of personnel training programs. Also, through this agreement, Gestur Huerto del Cura, SL will offer discounts to the university community of the UMH in the different services offered by this group.
Read more

Subscribe to our Newsletter to find out about all the news and receive exclusive discounts from Hotel Huerto del Cura.
subscribe